A decade of dependency: How digital tools have changed our lives 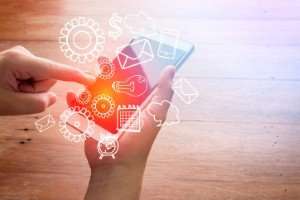 A new study by Ofcom has revealed just how dependent on technology the UK has become over the past decade.

The way we interact with technology has changed almost beyond recognition in the last few years. With smartphones becoming ubiquitous and people now expecting a constant connection to the internet, no matter where they are, how have our attitudes to digital tools transformed over the past ten years?

This was what the latest Communications Market for Ofcom sought to find out. The regulator looked at how technology has affected our lives since the first iPhone and Android devices hit the market in 2007 and 2008 respectively, and it found that people in the UK have become highly dependent on connectivity.

Smartphones at the heart of people's lives

In 2008, less than one in five adults in the UK (17 per cent) owned a smartphone, but in 2018, that figure has reached 78 per cent – and climbs to 95 per cent among those aged between 16 and 14. And many of these people rate their handset as the single most important device they own.

Almost four out of five people (78 per cent) said they could not live without their mobile phone, with 71 per cent saying they never turn it off and 72 per cent using it as their most important means of accessing the internet.

Ian Macrae, Ofcom’s director of market intelligence, said: "Over the last decade, people’s lives have been transformed by the rise of the smartphone, together with better access to the internet and new services.

"Whether it's working flexibly, keeping up with current affairs or shopping online, we can do more on the move than ever before."

Most Brits now expect to be connected at all times, whether this is at home, at work or on the move. Ofcom's research found many people want to be online during their commute in order to help them complete personal tasks (42 per cent) or work-related activities (35 per cent).

Unsurprisingly, younger adults are the most likely to multitask on their commute, with nine per cent of 18-34-year-olds carrying out eleven or more online activities, compared with just one per cent of over-35s.

Some two-fifths of respondents to the survey (41 per cent) said being always online helps them work more flexibly, while 74 per cent agreed that it helps them stay close to friends and family. Nearly two-thirds of adults (64 per cent) stated the internet is an essential part of their life. One in five adults (19 per cent) spend more than 40 hours a week online, up from just five per cent ten years ago.

However, Mr Macrae noted: "While people appreciate their smartphone as their constant companion, some are finding themselves feeling overloaded when online, or frustrated when they’re not."

The impact of technology on society

Ofcom's research found that around a third of people reported feeling cut off (34 per cent) or lost (29 per cent) without the internet, while 17 per cent said they find it stressful if they aren't able to get online. Half of all adults (50 per cent) stated their life would be boring if they could not access the internet.

More than half of respondents (54 per cent) admitted that connected devices have interrupted face-to-face conversations with their family and friends, while 43 per cent believe they spend too much time online. Some 15 per cent of Brits think that being constantly-connected makes them feel as if they're always at work.

Many people also feel that being unable to switch off a smartphone and engage in person is socially unacceptable, though Ofcom noted there is a clear generational divide here. For instance, while more than half of adults (53 per cent) say they are usually on their phone while watching TV with others, 62 per cent of those aged over 55 think this is unacceptable, However, this drops to just 21 per cent of those aged between 18 and 34.

The research shows just how indispensable smartphones and connectivity have become to our lives, as well as how far we've come in ten years. After a decade of digital dependency, the new question is, where will we go next?