A phone for your phone – could companion devices be the next big trend? 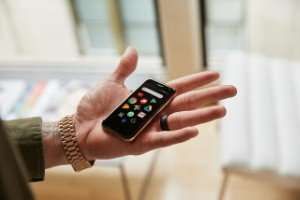 Could new, smaller 'companion phones' be the next big thing in the mobile market?

It's fair to say the smartphone market has become somewhat saturated over the last few years. With the likes of Apple, Samsung and Sony unveiling new, beefed-up versions of their flagship devices every year, it's a constant arms race to have the best camera, the brightest screen or the most storage space in order to stand out from the crowd.

But in reality, there's only so much you can do by adding better specs and more features before things start to get a bit old hat. Plus, as phones have expanded in size over the last few years to accommodate bigger displays and more powerful components, some people may feel things have gone too far.

At the same time, there are growing concerns that people are becoming too obsessed with their smartphones. Recent figures from Ofcom revealed that almost four out of five people (78 per cent) say they cannot live without their phone, with the average user spending two hours and 28 minutes a day online via their smartphone.

But while many people may want to take a break from their device, the thought of being completely disconnected from the world could be too much to bear. So what is to be done about this?

Some manufacturers think they've come up with a clever solution to these issues in the form of the 'companion phone'. Several of these have been unveiled recently or are in development, and they essentially consist of a smaller, thinner device that promises to offer all the key functionalities of your phone, but in a smaller form and without all the bells and whistles.

One of these was shown off recently in the US and revives a brand that might be familiar to any fans of 90s gadgets – Palm. The handset is about the size of a credit card and doesn't include features such as a headphone jack or wireless charging, but it does have two cameras and is a fully functioning Android smartphone in its own right.

Palm, which is now owned by a San Francisco-based startup backed by Chinese firm TCL, describes the device as "a fully connected product that is in sync with your existing smartphone, so all of your connectivity can go where your smartphone can't". It also has some big names backing it, with fashion brand Kate Spade designing a bespoke case for the handset and basketball star Steph Curry signing up for marketing duties. He's described as a 'creative strategy director' at the company and the NBA player tweeted he was "hyped to bring Palm back".

The device will cost $349 (£263) and be available exclusively in the US on the Verizon network, but it's far from the only such gadget in the works. Japanese firm NTT Docomo has also unveiled a similar phone that will be released next month, though it will have more limited functionality, with users able to make calls and texts and access the internet, but there is no camera or facility to work with mobile apps.

Are they likely to take off?

Early reaction to Palm's offering has been mixed, to say the least, with many commentators reacting with bemusement to the gadget, in particular the maker's claim that the companion device could be useful for people who are looking to take a break from their main phone.

The Verge, for example, called it a "weird little thing" and noted that "getting a second phone to help you get away from your main phone is a patently ridiculous idea". However, it also said the idea is not without its charm, and it might be a more elegant solution than a cheap feature phone for people who don't want to be completely out of touch.

The Palm and the Docomo devices may represent opposite ends of the companion phone spectrum, from full featured to more basic functionality, but both mark an effort to tap into a new market among users who are not looking to replace their main smartphone, though some experts have doubts about whether they will be a practical solution.

Ben Wood, chief research analyst at CCS Insight, told the BBC: "A small companion phone looks like an appealing idea on paper, but the devices tend to be a compromise and furthermore consumers have to pay for them over and above their existing smartphones as well as often requiring additional airtime fees too. "

Plus, as several commentators pointed out, where do we go from here? Is the future a companion phone for your companion phone when you need to take a break from that? It could be the start of a whole new world of ever-shrinking phones!