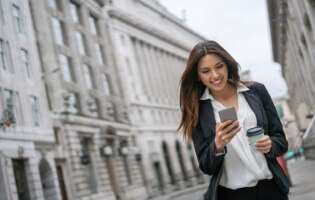 The BlackBerry KEYone has been released in the UK and is garnering some real praise, particularly for its efficient keyboard and strong security solutions.

BlackBerry’s latest smartphone, the KEYone, has been launched to almost unanimous praise, with its security being lauded as some of the best on the market.

The device was designed by BlackBerry, but manufactured, marketed and distributed by TCL. It is the last device BlackBerry intends to design on its own and the company will be hoping that it lifts the current state of its smartphone business.

Combining a 4.5-inch touchscreen and the physical keyboard that made the company famous, the KEYone is winning over fans of the old BlackBerry devices as well as new users. Stuff.tv said: “Tiny, tactile physical keyboards were BlackBerry's bread and butter once, so it feels right that one should sit so centrally on the KeyOne.”

The keyboard is actually useful for more than just typing. It functions as a touchpad for navigation, allowing users to swipe across it as they would on a screen. The keys can also be used as shortcuts, so they can be assigned functions and launch apps with a single tap. The fingerprint scanner is embedded in the space bar, which The Verge called “effortless”.

Its screen is one area that reviewers have not received particularly well, though. It has a ratio of 3:2 and is one of the smallest of any smartphone made today. TechRadar.com said it was “not great at entertainment,” adding that it would make “some applications, and particularly video content, look a little odd”.

However, Trusted Reviews said that besides that, the screen “is pretty good,” explaining that its “1620 x 1080 resolution gives the display a crisp 434ppi (pixels per inch) density, ensuring text and icons look uniformly sharp.”

The KEYone could end up being a real favourite of enterprises and those looking for a good work phone, with TechRadar.com saying “its smart and secure software give businesses some peace of mind”.

It has been called the most secure Android phone yet and comes pre-installed with some enterprise-level software, including BlackBerry’s DTEK app allowing users to check on the security status of the device.

The 3505mAh battery has also seen a great deal of praise. The Verge has pointed out that it can last most users a full two days, although the reviewer caveated that by saying that heavy usage resulted in him managing one day.

According to Stuff.tv, “At the very least, the KEYone is the best BlackBerry we’ve seen in years. At the most, it could be one of the biggest smartphone surprises of 2017.”