Busting the ‘myths’ of 5G 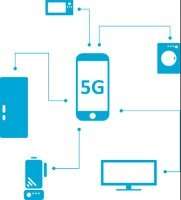 Ericsson has identified four key myths that may be negatively affecting people's perceptions of 5G technology.

The next generation of mobile connectivity – 5G – is set to arrive in the UK before the end of the year. But while there has been much written about how the technology has the potential to transform areas such as the Internet of Things and big data, for more day-to-day activities, particularly individuals connecting to the internet via their phones, there is more scepticism about what the impact will actually be.

However, many of these doubts are not reflected by reality – at least according to mobile networking firm Ericsson. Admittedly, it has a vested interest in promoting 5G as widely as possible, but it's highlighted four common misconceptions about 5G that may be tempering excitement about the technology, based on a survey of over 35,000 consumers in 22 countries around the globe, as well as focus groups in London, New York and Seoul.

Jasmeet Singh Sethi, head of ConsumerLab at Ericsson Research, said: "Through our research, we have busted four myths about consumers’ views on 5G and answered questions such as whether 5G features will require new types of devices, or whether smartphones will be the silver bullet for 5G."

So what are these myths, and what could the reality mean for the 5G market?

1. There are no near-term consumer benefits of 5G

The idea that any benefits of 5G will take many years to realise or be reserved solely for large-scale industrial uses is not the case, according to Ericsson. In fact, it found consumers believe the arrival of 5G will offer significant performance benefits almost immediately, particularly for users in busy cities.

For instance, it found six out of ten residents of large cities around the world currently feel the impact of congestion on existing mobile networks, which they expect could be relieved by 5G, while a significant proportion of users around the world feel today's mobile data speeds are not fast enough for their needs.

2. Users are unwilling to pay a price premium for 5G

The idea that 5G will only offer incremental improvements over 4G and users will therefore not be prepared to pay a price premium for the technology was also questioned by Ericsson's research. In fact, users around the world said they would be prepared to pay an additional 20 per cent for access to 5G services, with this rising to a 32 per cent premium among eager early-adopters.

However, users won't be shelling out this extra cash just for improved speeds. Some four out of ten of these high spenders expect to see new use cases and payment models emerge for 5G within two to three years that will make any extra costs worthwhile.

3. The benefits of 5G will be restricted to smartphones

Though much of the focus for 5G has centred around its potential for improving the performance of today's existing mobile technology, current smartphones may not be the best platform for the technology, according to Ericsson's research.

For instance, more than four out of ten current iPhone users (43 per cent) said today's form factors are unlikely to be able to make the best use of 5G. Instead, these users expect advances such as foldable screens, holographic projection and 360-degree cameras will be key features of upcoming 5G devices, while half of those surveyed suggested the technology could allow augmented reality glasses to become a mainstream solution within five years.

It will also not only be mobile devices that benefit from 5G technology. Many consumers also expect the technology to be a useful alternative or supplement to fixed-line broadband networks in the coming years – especially for homes and businesses in more remote locations, where it may not make economic sense to lay expensive fibre cables that go right to the door, but 5G signals will still be able to reach.

4. Future demand will be predictable based on current usage

Finally, the idea that what people today use their mobile services for will be a useful predictor for future demand was also dispelled by Ericsson's research. The firm stated the emergence of new use cases and the greater opportunities afforded by 5G could completely change people's usage profiles compared with 4G.

For instance, half of users expect their mobile data usage to increase significantly on 5G, with one in five suggesting they will increase their usage tenfold, using up to 200GB per month.

While video consumption will play a major part in this – with users expecting to view an additional three hours of content a week when on the move compared with today – there will also be widespread use of new categories of traffic. For instance, six out of ten respondents believe 5G-connected home robots will be a status symbol in the coming years, while 40 per cent expect in-car 5G capabilities to be as important a feature as fuel efficiency and engine power in the next five years.