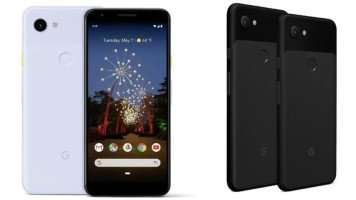 Google has introduced its new Pixel 3a and 3a XL smartphones, which aim to offer a more budget-friendly alternative to its current flagships.

Google has used its annual I/O deeloper's conference to introduce two new additions to its Pixel line of smartphones, which aim to offer a far more affordable alternative to its existing Pixel 3 and Pixel 3 XL models.

The move comes as the company looks to give its Pixel line a shot in the arm and compete more effectively with the likes of Samsung and Huawei, who until now have offered cheaper entry-level options for those unwilling to pay a premium for the brands' flagships.

By contrast, BBC News noted the cheapest devices available from Google were £70 more than Samsung's Galaxy S10e and £40 more than Huawei's P30, with no 'mid-range' alternative available.

But the newly-announced Pixel 3a and Pixel 3a XL will change this, costing just £399 and £469 respectively in the UK.

General manager and vice-president at Pixel Mario Queiroz said today's customers expect a lot from their smartphones, including a premium camera, tools that help out with day-to-day tasks and a long battery life.

He added: "You also don’t want it to break the bank. The new Pixel 3a and Pixel 3a XL are all of those things and more, for half the price of premium phones."

While the new devices have a lot in common with their premium alternatives, including OLED displays, augmented reality apps and machine learning features to improve photography, there are also a number of compromises to keep the cost down.

For example, they lack wireless charging features and only have a single selfie camera, dropping the second wide-angle lens of the Pixel 3. Their bodies are also plastic rather than metal and glass, and the Qualcomm 845 processor in the main Pixel 3 has been replaced by a lower-power Qualcomm 670.

Despite this, Mr Queiroz told the BBC the new phones should stand out from other similarly-priced models, as they still offer the most up-to-date experience.

"Most phones in this general price range are phones from last year or from two years ago, or they are phones that are 'specced' very differently and even have different brands," he said. "We wanted to bring a true Pixel experience to this price point."