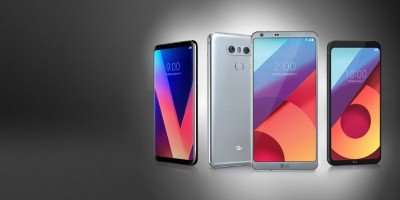 Smartphone makers are pushing the boundaries of what specs they can fit in a handset, with more powerful components and better hardware than ever before.

A few years ago, it seemed like there was one maxim when it came to smartphone design: bigger is better. After the feature phone years, where every manufacturer seemed to be on a mission to make a phone so small you could lose it forever in a cluttered handbag, the advent of better display tech saw everyone scramble to stretch their screens as far as possible.

Inevitably, we eventually found the limits of what people would put up with. Phones that required two hands to use or needed special design features so people could reach icons at the top marked the tipping point, and we've now reached a happy medium where around 5.5 inches is almost universally accepted as the ideal size for most phones.

Yet the drive to outdo competitors when it comes to better stats, fancier screens and more powerful components remains as strong as ever, and we're currently in a bit of a bright period for innovation. With near bezel-less screen design and cutout notches helping solve the problem of bigger screens without the need for a bigger form factor, phone makers are now turning their attention to what's on the inside of their devices in order to stand out from the crowd.

Indeed, in the last few months, several companies have unveiled devices that push the boundaries of what we can expect from handsets. For example, this month, Chinese manufacturer Xiaomi introduced its latest flagship device, the Mi Mix 3, which comes with the option of up to 10GB of RAM; the first smartphone to break this barrier.

This is, to put it simply, a lot, especially if you remember the days when 640K was deemed good enough for anyone. Indeed, most desktop and laptop PCs manage to get by just fine with 8GB, so packing that much RAM into a phone may seem a bit excessive. But while it may seem unnecessary right now, it will surely not be too long before it's seen as the norm.

It's not just in RAM where the numbers are getting bigger. Samsung's latest Galaxy Note 9, for example, offers users up to 512GB of storage, so you can take as many selfies as you like and never have to worry about that dreaded 'insufficient space' notification.

Meanwhile, LG's latest V40 offers users no fewer than five individual camera lenses, and it's expected that Nokia's next premium device will follow suit, setting the stage for five-camera gadgets to become standard in 2019 and beyond.

What to expect from the next generation of devices

In many ways, this competition to build the biggest-spec phone possible reflects the fact that smartphones have become the primary computing device for many users. Certainly, it's no coincidence that the likes of Xiaomi and Huawei in China have been among the leaders in this area, with their devices aiming to meet the insatiable demand of consumers in that part of the world who may exclusively interact with the world via their handset.

It's also setting the stage for the first generation of 5G-capable products from next year. This technology promises to change the way in which we use mobile devices, in much the same way that 4G made using it as a primary computing device viable for the first time, so the hardware itself will need to be ready.

Faster browsing, better video quality, Ultra High-Definition and 360-degree video streaming, improvised virtual and augmented reality capabilities and instant connectivity to the cloud are all potential benefits of 5G and could open up many new opportunities for manufacturers. Therefore, we can expect another big leap forward in specs in the next couple of years to really make the most of this.