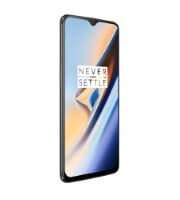 OnePlus has introduced its latest 6T flagship smartphone, with prices set to start at £499.

At a launch event in New York this week, the company officially revealed the device, confirming many of the rumours and leaks that have been swirling around in recent months.

The gadget will, as many predicted, feature a large 6.4-inch AMOLED display with thin bezels that give it an 86 per cent screen-to-body ratio and, while it has a now-customary notch for the front-facing cameras, OnePlus has manage to shrink this down to a much smaller intrusion into the screen than many of its competitors.

It also becomes one of the few devices to incorporate its fingerprint scanner into the display itself, along with the significantly more expensive Huawei Mate 20 Pro. OnePlus claims that the 2D optical fingerprint scanner can be used 150 times a day for ten years before failing and will be able to unlock the phone in around 350ms.

Under the display, the OnePlus 6T features Qualcomm's latest 845 processor, a choice of either 6GB or 8GB of RAM and up to 256GB of storage space. It also comes with dual-SIM support and the latest update of the Android operating system, version 9.0 Pie.

It also boasts a larger battery than its predecessor, the OnePlus 6, but still includes the earlier phone's innovative fast charge system, which should make the 6T one of the fastest-charging devices on the market.

In a blog post, OnePlus explained the 6T has been designed with the input of the community, with the team going "above and beyond to create a great flagship experience".

"The OnePlus 6T continues our proud tradition of combining industry-leading specs with fast and smooth software for a truly burdenless experience," the company continued.

However, despite the premium specs, the 6T won't come with a high-end price tag. The device is expected to start at £499 when it goes on sale in the UK on November 6th, with the entry-level version offering 6GB of RAM and 128GB of storage. Meanwhile, the top-end version, with 256GB of storage and 8GB of RAM, will cost £579.