Samsung Galaxy Note 9 – what do the critics think? 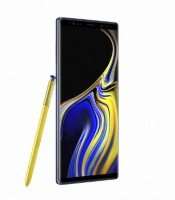 Find out what the critics thought of the Samsung Galaxy Note 9 in our review round-up.

Samsung's much-anticipated Galaxy Note 9 was finally unveiled last week, putting an end to months of speculation about what would and wouldn't be included. With a host of high-end specs – and a price tag to match – it's clear the Korean manufacturer has made an effort to appeal to power users who demand the biggest, best performance.

But has this paid off? Reviewers have had their hands on the device for a while now, and the verdict is in. On the whole, it seems the answer is yes, with the phone being greeted with a range or four and five-star reviews.

Prices for the Galaxy Note 9 start at £899 in the UK for a SIM-free handset with 128GB of storage, and you can add another £200 to that if you want the 512GB version; for that amount, you'd want to feel as if you're getting your money's worth.

Happily, this seems to be the case, with several reviewers praising the device as "big and beautiful". Gizmodo noted that the phone tries to "give you everything" and noted that, if you opt for the higher-spec model, it will provide more memory and storage than a mid-range laptop.

Mashable, meanwhile, noted that the phone comes with "almost no compromises", and had particularly warm words to say about its, bright, high-resolution screen and punchy stereo speakers.

The S Pen – a great accessory

One of the standout features of the Galaxy Note 9 is the included S Pen. This not only works as a stylus – certainly a useful feature for business users navigating the handset's huge 6.4-inch screen – but also doubles as a Bluetooth remote that can activate the camera, start and stop video, act as a slideshow clicker, and more.

Reviewers generally agree that this is more than just a useful gimmick. Engadget described the accessory as "compelling" and said it is "a joy" to be able to set the phone down in a convenient place and still be able to access key functions.

Some were less convinced, with several pointing out that the future success of the S Pen will depend on how much support it gets from third-party developers, but even the sceptics agree the potential is there if it can be harnessed.

Another positive for many commentators was the upgraded battery. The Galaxy Note series has had well-publicised problems with batteries in the past, but the huge 4,000mAh power pack in the new handset seems to be winning many fans.

Engadget, for example, found the battery typically lasted two days with average use, but could hit 15 hours even when playing power-draining video, while Gizmodo described the time between charges as "superb". CNet also rated the phone as ten out of ten for its battery life.

Bixby – a drag on an otherwise fine phone

A few reviewers did have some negative points, however, with one common complaint surrounding Samsung's Bixby artificial intelligence. Wired noted, for example, that the digital assistant still trails far behind the likes of Amazon Alexa and Google Assistant, while it also complained about how easy it is to inadvertently wake it thanks to the dedicated button, which was described as "overkill".

Engadget agreed that Bixby remains "a bit of a mess", but added that, as an optional feature you can learn to avoid, it's not a deal breaker. Indeed, most of the reviews agree that, while not a flawless phone, it is still one of the best premium devices to hit the market this year.