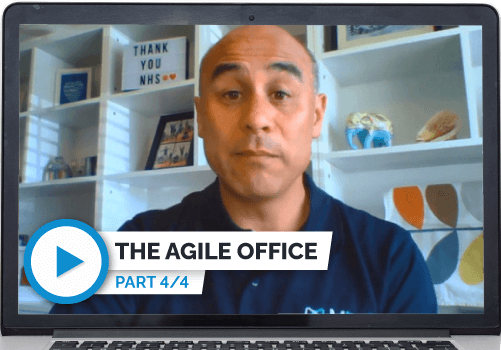 In the final part of our webinar series, Ben Neo from Mitel looks ahead to what the future of work may look like in a more agile world.

It’s become increasingly clear over recent weeks that the remote working practices put in place in the past couple of months are far from a temporary solution, and the way in which we work is set to look radically different in the months and years to come. Indeed, some surveys have suggested only one in four employees will want to go back to offices full-time, in the future.

In the final part of our recent webinar, Ben Neo, Head of UK Charity Sector at Mitel, therefore sought to look forward and predict what the workplace of the future will look like and what organisations need to do to prepare for this environment.

He also shared some of the insights his organisation has gleaned from what customers have already done to react to a more agile way of working.

You can see his full presentation below, or click the links to hear what the other speakers at the event had to say.

How the world of work is set to change

Ben noted that before the pandemic, although the majority of organisations were looking at digital transformations, many businesses were still tied to an old-fashioned, office-based way of working.

Typically, only a few selected workers were given remote working licences and this was viewed as a privilege for trusted users rather than a right, while many cultures were still based around presenteeism and face-to-face meetings. But this has quickly changed.

Ben said the new normal could see up to 80 per cent of the workforce become ‘deskless’, working wherever they feel they can be most productive at any given time. This may be an office, but it will also be much more acceptable to work from home, relying on communications technology such as video to keep in touch.

He said: “We’ve passed the cultural barrier as to whether or not remote working works. People have realised it will work, they can be trusted.”

The way we connect has also changed as a result of remote working. For instance, Ben noted that while meetings may have become more frequent, as managers seek to check in regularly and encourage social meetings, they’ve also become shorter and more focused. This helps boost productivity and will be a cultural shift that businesses will be keen to retain in the post-Covid world.

This agile, deskless culture can bring a range of benefits if companies can deploy it effectively. For instance, Ben highlighted figures that show remote working can boost the productivity of a worker by between 13 and 33 per cent. Even at the lower end, this can add up to the equivalent of an extra day of work per week.

To achieve this, management styles will have to change, with firms set to become more ‘people-centric’ in order to support remote working. When they aren’t able to see people face-to-face in the office, they will have a greater responsibility to check in and ensure remote workers are included, and are looking after their mental health.

At the same time, developing more community-led initiatives to support and educate people – including employees, customers and partners – about how to make the most of the new environment will also play an important role in allowing a culture of remote working to thrive.

Ben noted that all of the technology needed to create a more agile workforce is already available right now. However, it will be up to businesses to determine which solutions they will adopt.

Tools such as cloud computing and artificial intelligence (AI) will be central to this, as they will allow firms to scale up and access new services quickly. Indeed, by 2025, Ben noted up to 95 per cent of customer interactions will be powered by AI.

However, it will be hugely important for companies to choose the right technology partners to implement this.

Ben said: “It’s very easy to bring a mish-mash of things together and hope it works. But speak to the right vendors and the right partners and they’ll give you some great advice.”