The HTC U12 Plus – reviewers give their verdicts 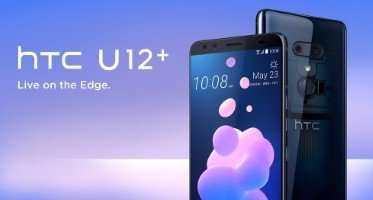 Smartphone reviewers have offered their thoughts on the U12 Plus, the latest flagship device from Taiwanese manufacturer HTC.

Apple and Samsung continue to enjoy a dominant position in the smartphone market – particularly in the Western world – but recent trends have indicated that these giants will not have it all their own way in the coming years.

These brands accounted for more than half of global smartphone shipments in the first quarter of 2012, but by Q1 2018 their collective market share had fallen to 39 per cent. One of the key reasons for this is an increase in the number of alternative providers and handsets available to consumers.

The variety of choice available on the market recently expanded further with the launch of the U12 Plus by HTC. The Taiwanese manufacturer introduced its new flagship smartphone under the billing of "bigger, bolder and edgier than ever", but what do the reviewers think?

According to HTC, the U12 Plus serves as a showcase of "cutting-edge innovation, unrivalled usability and extraordinary design".

"The U12 Plus is HTC's biggest and boldest flagship phone ever," the company said. "There is simply no other phone as big, beautiful and easy to use as the HTC U12 Plus."

Defining characteristics of the new smartphone include its Edge Sense 2 functionality, which allows users to physically squeeze the device to perform certain tasks, such as taking photos or zooming in on maps.

Its dual camera system offers 2x optical zoom and 10x digital zoom for photos, while the audio experience is driven by BoomSound speakers and USonic earbuds with noise cancellation.

The U12 Plus runs on the Qualcomm Snapdragon 845 platform, which is designed to "shatter performance expectations" and provide beyond-gigabit LTE download speeds, according to HTC. Users will receive 6GB RAM as standard and up to 128GB of storage space.

First impressions of any phone will be largely based on how it looks. HTC's latest flagship offering comes in three all-glass, liquid surface colour variants: translucent blue, ceramic black and flame red.

According to Android Authority, the black option "probably scores the least cool points but the most practical points". The site also noted that the flame red handset is "a real eye-catcher". The colour fluctuates from deep red to gold, with occasional hints of yellow and orange depending on the angle and lighting.

Buyers who opt for the translucent blue colour scheme will get a frosted look that shows off some of the device's internal components, including the fingerprint sensor chip and cabling.

The appearance of the U12 Plus is also defined by the lack of any buttons on the front, providing more space for the full-screen 18:9 display.

The Edge Sense system, which replaces regular power and volume buttons with pressure-sensitive pads, is arguably the most significant feature of this new phone in terms of user experience. The pads essentially function like buttons, but vibrate instead of clicking.

Android Authority said: "This kind of button design not only feels cool, but it also helps eliminate even more areas where dust and water might seep in. Speaking of which, the HTC U12 Plus is IP68-certified."

The phone's pressure sensitivity also means it can differentiate between right and left-hand grips and detect whether it is being held vertically or horizontally, helping to address unwanted screen rotation.

While Android Authority seemed fairly enthusiastic about these features, Tech Radar's verdict was that the squeezable sides feel "gimmicky".

Good sound and design, but do the innovations pay off?

Looking at the HTC U12 Plus as a whole, Tech Radar had a fairly mixed opinion of the new smartphone. The site described it as a "tremendously pretty, well-crafted and capable" device, with "incredible" audio quality and a "decent" camera, but also pointed out that "there's little here to really wow".

"It's a phone that impresses greatly in places, but doesn't stick its head above the parapet in any meaningful way… so there's not much for potential purchasers to get very excited about," the review said.

Comparing HTC's new handset to the Samsung Galaxy S9, Tech Advisor said there is no clear winner between these two rivals, with buyer decisions likely to depend on personal preferences and priorities.

However, the reviewer's opinion was that the Galaxy S9 is just ahead of the U12 Plus, partly thanks to its compact, lightweight build – compared to the HTC phone's "bulky" handset – and its curved-edge AMOLED display.

Still, there is a lot to recommend the HTC U12 Plus, particularly for buyers looking for an attractive handset that offers a distinctive user experience.