UK phone services ‘set for revolution’ thanks to new technology 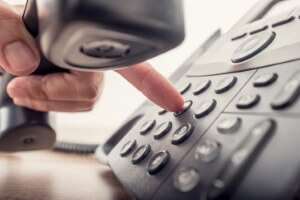 What's the future of landline phone services in the UK? New research by Ofcom suggests a generational gap is emerging.

When was the last time you spoke to a business on the phone? In today's era of instant messaging, chatbots and social media, for many firms, it may have become a much less common way of maintaining contact with customers.

However, phone services in the UK haven't gone away altogether, and in fact are set to be revolutionised by the introduction of new technology in the coming years.

That's according to a new study by Ofcom, which found that while the number of landline calls made has halved over the past five years, growing use of broadband VoIP technology instead of traditional copper lines will change how many people think about making calls.

It found that in 2017, 54 billion minutes of landline calls were made in the UK, down from 103 billion in 2012. Over the same period, the number of mobile minutes used increased from 132 billion to 149 billion, while the average amount of mobile data used rose from 0.2GB per person to 1.9GB.

Ofcom said this trend is reflected in the fact that younger people in particular are now far less likely to use the phone when they want to get in touch with a business.

One respondent to the survey, an 18-year-old from Aberdeen, told the regulator: "Calling someone is a bit daunting. It’s much easier and quicker to WhatsApp my friends. If I have to call a company, I'll always try to use webchat if it’s available."

However, this does not mean businesses should be making phone contacts a lower priority, as older generation still prefer the more personal touch that speaking with someone on the phone can provide.

VoIP to mean the end of local codes?

Head of numbering at Ofcom Liz Greenberg said: "Some of us can remember a time when we stored phone numbers in our head, rather than our mobile. But the way we use and feel about telephone numbers is changing.

"In the future, as more calls are made over broadband, dialling codes won’t need to be fixed to a particular part of the country. So the question is – could area codes become a thing of the past?"

Ofcom noted that younger people may be more likely to welcome this, as many of these individual do not even realise that area codes have geographic significance. Older people, on the other hand, were found to be "strongly opposed" to the idea of abandoning geographic area codes.

The regulator suggested one reason for this is that they are more likely to recognise and trust local numbers, with these codes said to be particularly useful and reassuring when people are looking for local businesses. One survey respondent, a 67-year-old from Wrexham, said: "It's helpful to know where things are."

Therefore, while the days of the area code may be numbered, for many they remain an invaluable resource, helping businesses present a local and trustworthy image for customers who value the personal touch.