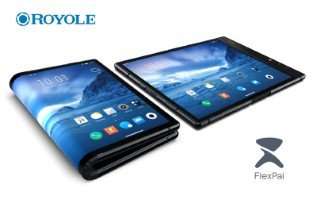 US startup Royole has shown off what is set to be the first foldable smartphone to go on sale to consumers.

A California-based start-up firm has introduced what is set to be the first flexible smartphone to go on public sale, beating the likes of Samsung and LG to the market.

Six-year-old firm Royole showed off its FlexPai handset at an event in China, where the device is expected to go on sale this month, with deliveries starting in December. A slightly different version will be offered to developers across the world at the same time, the BBC reports.

The FlexPai features a 7.8-inch display when opened up, but when folded, this transforms into three separate smaller screens on the front, back and spine of the device. It is set to cost between 8,999 and 12,999 yuan (£1,011-£1,460) depending on the memory and storage specifications chosen.

Many in the industry have been taken by surprise, as Royole is a little-known company whose background is in manufacturing flexible displays, and has never produced a smartphone before.

Its announcement puts it ahead of Korean tech giant Samsung, which had been expected to preview its own foldable smartphone at an event on November 7th. However, it is understood to still be some way short of having a device that is ready for sale. Meanwhile, LG is rumoured to be preparing a flexible handset of its own in time for the next CES show in January 2019.

Carolina Milanesi, from the Creative Strategies consultancy, told the BBC it is "astonishing" to see such a little-known firm launch a flexible phone, adding that while the gadget is unlikely to sell in great numbers, it could help stimulate further development in the area.

"What's great is that it's putting this into the hands of developers, who will be able to start the legwork that will result in apps for flexible devices that will eventually be sold by Samsung and whoever else," she stated.

However, the phone may not be without its teething troubles. Videos of the device in action suggests that the Android-based operating system is still in need of work, with the display shown to flick between different orientations after being switched from one mode to another before settling.

It also weighs in at 320g, more than 50 per cent more than the iPhone XS Max or Samsung Galaxy Note 9.

This may be why some in the industry have labelled it a PR stunt, but it could herald the way for larger firms to bring their own plan forward.