WWDC 2018 kicks off, showing how performance is key to iOS 12 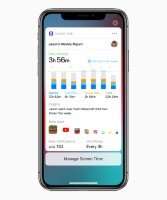 At WWDC 2018, Apple has unveiled iOS 12, its newest operating system, which will focus on boosting performance, even for some older smartphones.

Apple kicked off its WWDC 2018 developer conference yesterday (June 4th) with its keynote presentation detailing the new features it will be introducing to iOS 12, the newest version of its operating system.

Performance at the heart of iOS 12

This time, the focus is on helping devices perform more efficiently, with Apple's senior vice president of software engineering Craig Federighi telling attendees at the presentation that “with iOS 12, we're doubling down on performance”.

Speed is one of the main areas of improvement. Apple said it will be boosting speeds for users of iPhones as old as the 5S, which was released in 2013.

The company said the improved performance will enable apps to launch up to twice as fast as they currently do, while the camera could see a 70 per cent faster loading time. The home screen should also load faster after the device is unlocked, and the keyboard should appear in half the time it takes now.

Apple is also taking rival Samsung on by introducing the Memoji, an animated emoji (Animoji) users can create of themselves. The South Korean company attempted to implement a similar feature in its Galaxy S9. This was itself viewed as a response to Apple’s launch of the Animoji, a traditional emoji that could mirror the expressions in the user’s face.

Samsung’s introduction of its AR (augmented reality) emoji was not particularly well-received, with CNET calling it “shockingly bad”. Whether Apple does a better job remains to be seen.

That’s not the only way Apple is emulating its rivals. In its next version of Android – currently known only as Android P – Google announced it would be implementing features to reduce phone use. This includes allowing users to set time limits on apps and switching the colour scheme to black and white at bedtime.

During the first day of WWDC 2018, Apple said it will be introducing Screentime in iOS 12, aimed at helping people reduce the amount of time they spend on their iPhones and iPads. It will provide a weekly breakdown of device usage, including how long each app is being used, when they’re being used, how often the device is unlocked and where most notifications originate. Users will also be able to set limits for how long an app is used each day, with pop-up warnings when the deadline approaches.

Video calling will also see a change in the new iteration of iOS. Apple confirmed that with the next version, FaceTime will be able to host 32 participants. This could potentially deliver benefits to businesses with a large remote workforce.

Apple didn’t announce any new hardware during WWDC 2018, which means it will likely unveil new iPads and Macs later in the year.

The developer version of iOS 12 is now available, with the first public beta due later in the coming weeks. The final release is scheduled for release in September.